Planetapéia in New York with participation in Brazilian Day 2019

On August 26th of 2019 a comitive of Planetapéia wrote another chapter of the group's great historical facts, founded by Nerino Furlan 32 years old. The group began the journey from Planetapéia's Palace in Blumenau to the United States, landing in New York on Tuesday 27th of August. Planetapéia was invited to participate of the event Brazilian Day 2019, carrying the Blumenau and Oktoberfest traditions in the luggage, it was represented by the city flag delivered by Mayor Mario Hildebrandt.

Between the 27th and 30th the group participated in several social events in the city, sharing a piece of the local culture with the public and also with the Brazilians who were preparing for the Brazilian Day on September 1st (Sunday). Brazilian Day began 34 years ago celebrating culture and customs abroad, the event takes place on 46th Street between 5th and 6th Avenue in the city. Today the event has taken a huge proportion, expecting about 2 million people a year, the main celebration are concerts with Brazilian singers in New York.

To celebrate in style, Mr. Nerino Furlan decided to take to New York the Locopéia, a friendly little train popular at the Oktoberfest parades. Locopéia was created in 1999, built on the platform of an airplane tug, this vehicle brings joy wherever it goes. The group also had the opportunity to celebrate the 20th anniversary of the vehicle around Times Square in New York, after careful restoration, the sound and apperence of the Locopéia makes everyone in the crowd fascinated.

Locopéia was exported as Art to the United States, where the Planetapéia team performed all the importation and transportation of the vehicle, both in the United States and in Brazil. The vehicle departed from Itapóa Port on August 4th, accompanied by a group comitive. On August 29th, Locopéia was prepared for the weekend presentation in New York, and on September 17th, it boarded from the Port of New Jersey to return to Brazil in time for Oktoberfest 2019.

Picture: Kako Waldrich - Nerino Furlan and his own creation on New York

On Saturday, August 31st, the group began their performances on American ground. In the morning, Locopéia was on the famous Pre Brazilian Day "Feijoada" that takes place at Plataforma Grill located on 49th Avenue in New York. The vehicle and the group were the main attraction, cheering up all the guests. In the afternoon, a group of limousines took the members of Planetapéia to Times Square. New York Police closed the street for about an hour, in front of the most famous billboards in the world, where the group performed several high impact songs such as The National Anthem, New York New York and the traditional music of the "Centopéia" another vehicle crated by Nerino some years before. After striking the tourists, the Locopéia went through a parade along 46th Street to the 5th Avenue of the city.

On Sunday, September 1st, the group was located at 46th Street, where an event takes place, delighting all Brazilians and other guests. The participation was marked by a lot of joy, smiles, photos and magic that Wizard Nerino Furlan manages to arouse in the guests and the public wherever he goes. For sure, this was another milestone in the history of the Planetapéia Recreational Sports Association. Each one could have contact with the group and a Locopéia, awakening dreams and a child's spirit everywhere. 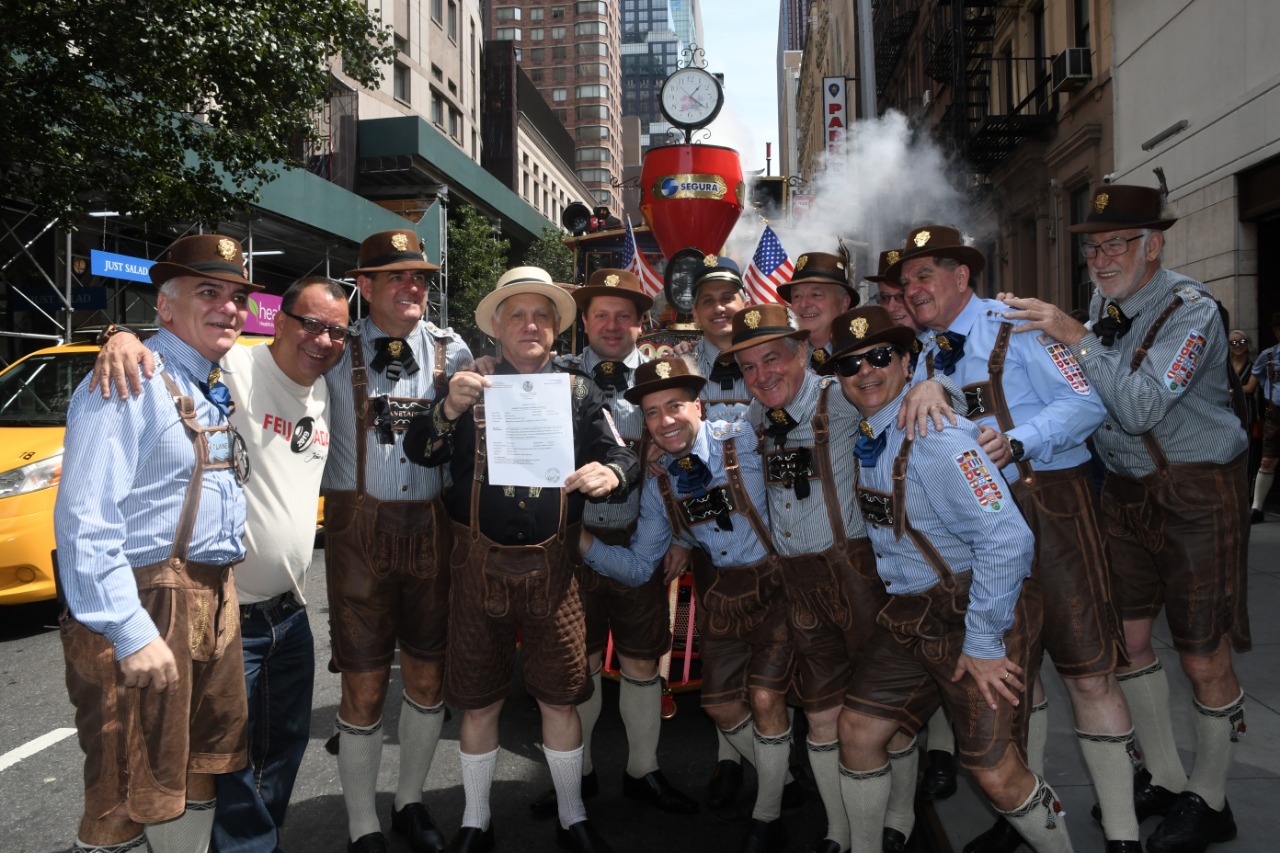